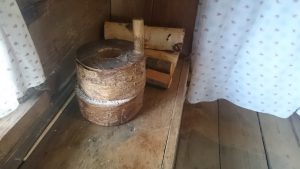 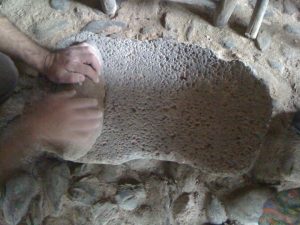 In 2010, a community organization from Sardegna, Italy, initiated cooperation with the Bread Houses Network to revive a local community oven. In the community baking events, they included milling flour from local ancient grain varieties. And the milling was done as thousands of years ago on a stone.

In 2016, in preparation for and within the framework of Varna European Youth Capital 2017, the Bread Houses Network in partnership with local organizations and day centers for people with special needs held community baking events with children, engaging them also in milling flour on stone hand mills. The children and their families were all impressed and inspired by the beauty of making your own flour and bread, and sharing it in a community with strangers and people of all walks of life. May this “community hand milling” movement continue expanding!

At the recent global conference “On the Rise: The Future of Bread”, held in May 2017 in the USA, where the Bread Houses Network also took part with a presentation, world-famous baker Peter Reinhart and main organizer emphasized the rise of the “just-in-time-milling” movement, as he calls it. This is how Peter summarized it:

“Remember this phrase: “Just in time milling.” Both Wolfgang Mock, the godfather of the home milling movement, and Chad Robertson, the reigning poster boy and visionary of the artisan bread movement, spoke about the importance of eating bread made with “just-milled” flour. Chad’s new bakery, Tartine Manufactory in San Francisco (and soon also in LA), mills the flour right there, in front of the customers, before mixing the dough. Wolfgang’s new Mockmill, which can attach to any home mixer such as a Kitchen Aid, will stone grind flour from any grain as you need it. He prepared a delicious just-milled oat berry cereal called muesli, for the audience and told us he’s been eating it every day for years, and attributes his robust health and energy (he’s around 70 years old but seems more a 30-year old) to this day-starter cereal. “When grain is milled fresh, you can eat it raw, uncooked!” he told us. So, whether raw or baked in bread, we’re going to be hearing a lot more about the benefits of freshly milled flour.”