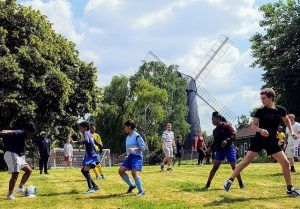 In May 2011, the founder of the Bread Houses Network, Nadezhda Savova-Grigorova, first visited and was deeply inspired to engage with the Brixton Wind Mill Project. The Brixton Mill Project is aimed at reviving as a community cultural center the old mill in Brixton, what people often define as “the most diverse neighborhood in the world”, and at the same time an area with serious problems of youth gangs and violence. The local people, after years of struggles, have finally created conditions for volunteer millers to produce a fine stone-ground wholemeal flour working on a stalwart modular machine that is over 100 years old. The vision is that people of all ages to be able to engage in real flour milling at the mill, as part of educational and cultural community activities, as well as developing a community garden with wheat and vegetables to be cultivated by the people from all ethnic groups.

The final installment in the series A History of Brixton Windmill in 16 Objects looks at a humble loaf of bread and its symbolic meaning throughout the ages. 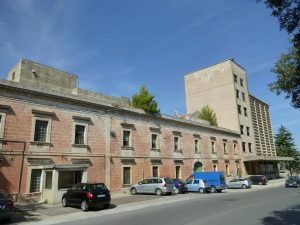 The Bread Houses Network and the city of Matera in Italy, selected as European Capital of Culture (ECoC) in 2019, are cooperating to develop various cultural and social projects as part of the ECoC Program in 2019. One of the projects in Matera is to develop the old mill Alvino (Mulino Alvino) into a cultural and educational center for all ages. The cooperation with the Bread Houses Network will link events between Matera and Plovdiv, the other city selected as European Capital of Culture in 2019, where the Bread Houses Network has a Bread House community cultural center. The countries between Bulgaria and Italy will be connected in a Bread Cultural Route, which will extend in the long term to a pan-European Bread Route and then Global Bread Route (read more at www.breadroute.net). 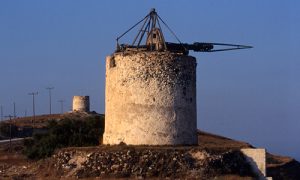 In the summer of 2014, the founder of the Bread Houses Network, Nadezhda Savova-Grigorova, was in Santorini for a special, non-work-related occasion – her honeymoon. However, when you love what you do, work always seems to find you, and Nadezhda stumbled across the beautiful vision of a local Orthodox priest, Father Nicholas. Father Nicholas wanted to revive a few local wind mills into community centers with various educational and social activities for children and mixed generations. Father Nicholas had been an archaeologist before becoming a priest, and he had published a wonderful book exploring the diverse types of ovens and baking traditions across Greece from ancient times until nowadays, including a special book for children. With this love for bread and its related fields, he was putting efforts towards giving new life to the abandoned, old mills of Santorini, and the project is still in progress. 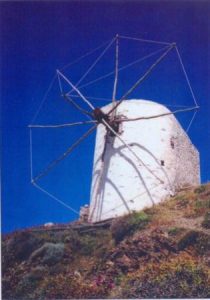 The Institute of Hellenic Mills is a non-profit organization established for the purposes of study, research, documentation, and protection of historical forms of mills, as well as related traditional systems of energy sources in the Greek territory. Its specific aims are: formation of archives within a Documentation Center; specialization of scientific and technical personnel; creation of a Museum of Molinological History in Greece and finally organizing regional and international meetings and exhibitions, as well as any other activities for the promotion of the “mill”.The term “mill” designates its various forms, as being classified according to aspects like:  source of driving force (hand-mill, animal- or human-driven mill, windmill, watermill, etc.), final product (flour mill, rice mill, gunpowder mill, oil-mill, tanning mill etc.), mechanical function (compression, hulling, sawing, grinding, crushing, etc.) and includes all those elements that constitute its physical surroundings. Being a member of The International Molinological Society (T.I.M.S.), the Institute of Hellenic Mills was established in Athens in 1996. Its regular members, both individuals and institutions from Greece or abroad, are approx. 300. They can be architects, archaeologists, historians, ethnologists, folklorists, engineers, restorers, lawyers, economists, researchers, mill owners, local authorities etc.

The Carob Mill Cultural Center, HAROUPOMYLOS (The mill of locust beans), was built around 1930 and belongs to the Agricultural Cooperative of Panormos, Crete. Here, locust beans, found in abundance in the area, were processed. Some of the processed products were distributed in the Greek market, such as locust bean flour, and others were exported abroad, such as the grains of the locust tree which were necessary for the manufacturing of every kind of film -for photographs or the cinema- as well as the production of cosmetics. A place full of memories for the older generation who lived to see it working, it reminds us of a period with different moral and aesthetic values. HAROUPOMYLOS was characterized as an industrial monument by the Ministry of Culture and has hosted various art events since 1996, although it was almost in ruins. In 1998, it was financed by the Regional Operational Programme (PEP) of Crete with 100 million drachmas.